The Aquatic Center will be opening June 4, 2022 at noon! Watch our social media pages for updates and events!

REMINDER! Children 8 and under must be accompanied by someone who is 14 years of age and older. Those who are under the age of 8 and arrive at the pool alone will not be admitted to the Aquatic Center.

REMINDER! Diapers can not be changed in the pool area. All Patrons must shower before entering the pool deck area! 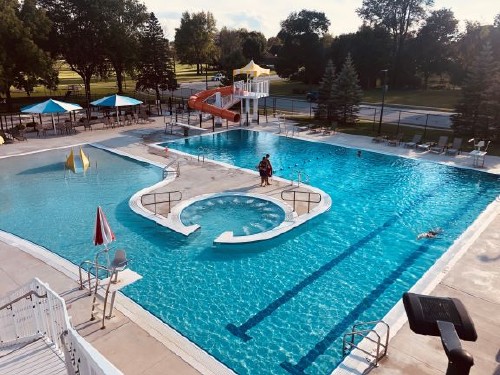 HOURS ARE SUBJECT TO THE WEATHER, POOL CONDITIONS, STAFFING AND POOL ATTENDANCE, THIS IS AN OUTDOOR FACILITY SO CALL AHEAD IF THE WEATHER IS QUESTIONABLE. (920) 898-1373

History of the Aquatic Center Expand

In 2004, the New Holstein Park & Recreation Commission recognized that based on the age of the municipal pool, which opened in 1961, and from discussions with Kubiak Pools and Stubenrauch Architects on the condition of the swimming pool, it was time to evaluate the future of the city’s municipal pool. Mayor Ron Karrels and the Common Council created a Swimming Pool Committee and appointed 16 members from the community to serve on that committee. The committee received proposals from three pool consultants and eventually selected Aquatica Design, LLC, to evaluate the municipal pool to determine if renovating the pool was feasible. In December of 2005, Aquatica Design presented a study to the committee that included a demographic analysis, an evaluation of the pool and bathhouse, two renovation options and a new construction concept. After considering the study and the cost of renovating, the committee came to the conclusion that it was not financially feasible to renovate the existing pool, and recommended to the Common Council that the committee investigate the construction of a new aquatic center.

The new aquatic facility is a very important amenity that is needed in the community. The aquatic center provides swimming lessons for both children and adults living in the area, and offers an attractive outdoor recreation amenity to individuals considering making New Holstein their home. Neighboring communities have indoor facilities, thus an outdoor facility sets us apart from them, and continues to help make New Holstein a viable city for families looking for a community to live, work and play in.

The new aquatic center would be a zero-depth/beach-entry design. Features would include: runout slides, floor fountain jet play areas, interactive play features, a child’s slide, a diving board, a drop slide, a whirl cove, two lap lanes and a sand play area.

The bathhouse would include men’s and women’s restroom/changing areas, a handicap restroom/family changing room, a concession room, a rentable party/meeting room and storage areas.

Construction of the new facility would begin in August of 2008, with completion in June of 2009. The new aquatic center would be constructed at basically the same site as the existing pool, however, the facility would be pushed further to the southeast, and orientated to utilize the city’s existing parking lot. The estimated cost, projected for the 2008-2009 construction seasons, is 2.5 million.

The Swimming Pool Committee has decided to move forward and begin a capital campaign to help pay for the project. The committee has worked hard developing the new aquatic center plan and is excited and committed to building a new aquatic center. Please help support this important community project and make a generous donation. Naming rights for the Aquatic Center, bathhouse, slides, and many other aquatic center features are available to anyone interested in making a significant contribution. Every gift of $500 or larger will be permanently recognized on a plaque to be located at the Aquatic Center.